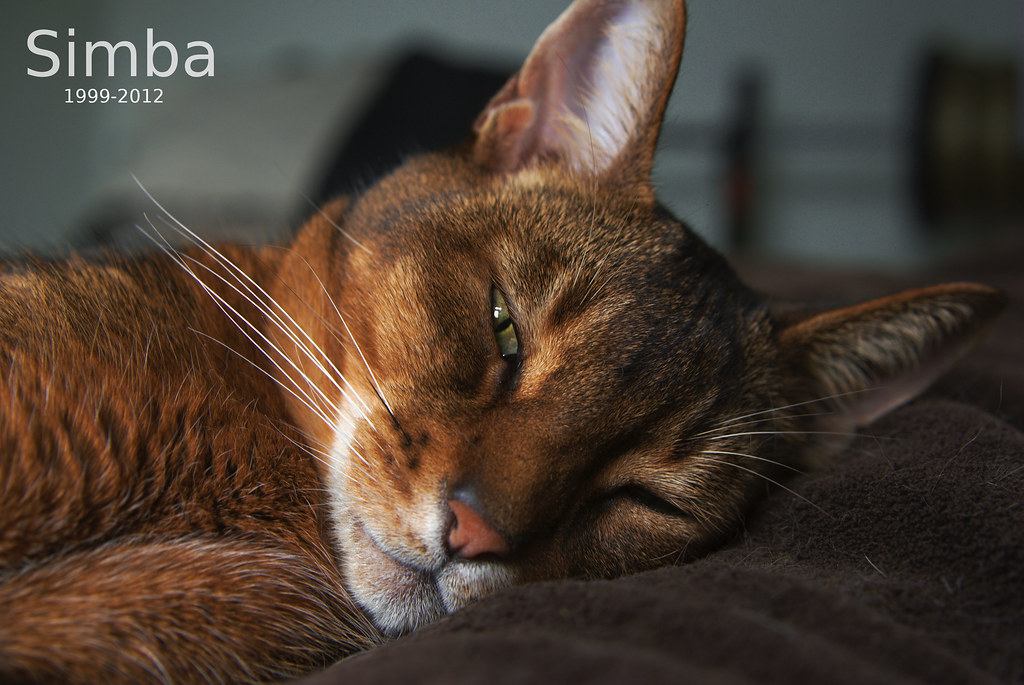 Simba (aka “Simbachu” or just “Chu”) was a lovely Abyssinian cat who I shared 13 years with. He was a pedigree “usual” Abyssinian from Libella Abyssinians. 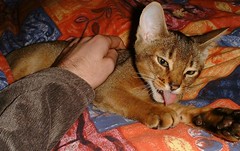 Simba as a kitten

I’d known for many years that I would love to own an Aby one day, ever since my first encounter with the breed. That first encounter took place when I was staying overnight with some friends of a friend and they had two young Abys, from what I recall a “usual” boy and a “blue” girl. I was captivated by their looks and personality – they were beautiful and engaging cats, friendly and interactive. The little boy Aby decided to make 100% sure I fell in love with the breed by sneaking into the room I was sleeping in and curling up with me for a cuddle (of course I was probably in his spot). Many years later I was in a position to have cats of my own and acquired Simba and Curzon, two Aby boys from different breeders (very sadly Curzon was only with us for a few months before passing on). The name for Simba was actually suggested by a friend – his slightly boxy head and big paws did give him the air of a little lion cub – and while it’s often a popular name for cats, it certainly seemed to fit him as a kitten. I don’t have many kitten photos of him as I didn’t have a digital camera back then (I did borrow one a couple of times). 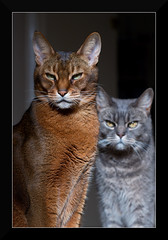 He was less than a year old when I added Misty to the family. He was curious about her and would have happily been friends with her, I think, but she was a little bit more independent in nature. There was some mutual grooming, but also some chasing and some scrapping. Simba was neutered but Misty wasn’t for many years, so he’d have to put up with her tarting at him when she was in heat. He’d occasionally be persuaded by her to have a go with her (some instinct must have remained) but he always came to shout at me afterwards as if confused about what had happened, or perhaps to confess! Their relationship seemed to be one of her tolerating him, for the most part. As Misty had needle sharp claws he would end up a little scratched and scabby around the ears and face from time to time due to their occasional scrapping. He would always eat like a starved dog, and if they were eating next to one another he would always finish his food before Misty had finished hers and then look to start on hers, so it wasn’t long before I separated them at meal times (partly to help keep his weight under control!). 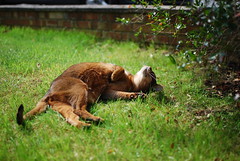 Both him and Misty were kept as essentially indoor cats. I did carefully introduce him to the outside to see if it would be possible to allow him short supervised sessions of access to outdoors and he did stick to the front garden and back garden, plus the immediate neighbour’s, as well as keeping away from the road. I did need to keep an eye on him to discourage him from crossing the road (he had no sense of the danger of cars) and, because I didn’t have a cat flap, to be able to easily get him back in so I could shut the door! He shares a trait with Theo of being into eating grass when outside. It was common for Simba to work his way around the border of the garden sampling the grass, although pretty much without fail he’d bring it up again a short time later! He loved chasing and eating insects in the garden (as well as indoors – he was very much an eater of anything he caught). 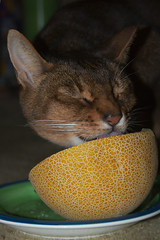 He was a bit of a pig when it came to eating cat food (I once tried filling up his bowl each time he emptied it and discovered he would keep eating dried food until he threw up through being overfull) and would always start reminding me of an upcoming meal time in the hour up to the usual time – just in case I forgot. He liked to supplement his diet with any insects or spiders that had the misfortune to get in his way – as soon as he caught them he’d eat them, no playing (Misty was the opposite – she’d play but not eat). I also discovered that he had a love of galia melons – something I discovered quite by accident. I’ll usually eat half a galia in one go, cutting it in half and then eat it with a spoon until there’s just the rind left. After putting the rind down on the floor Simba seemed to be attracted to it and started licking eagerly at the thin layer of melon inside the ride. He’d get as excited about melon as if I had something like tuna! He wasn’t quite as much of a fiend for pizza crusts as Misty, but he’d still have a go at them as well. 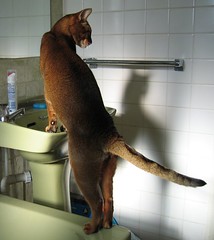 Simba, waiting for the tap

I’ve heard that it’s not an uncommon thing amongst cats, but he was never fond of drinking from a water bowl if there was an alternative available (although the water bowl was in the same room as the cat litter trays and the food bowls, they were each well away from each other). This would manifest at first in him trying to drink from any water glass (or at least sticking his paw in or knocking it over) and then he noticed me using the bathroom sink and had a go at drinking from the tap. Once he’d discovered that he would stand on the bath with his paws up on the sink and command me to turn the tap on when he wanted to drink. A year or so later I found you could get drinking fountains for cats, so I thought it worth a go and it was a great success (curbing his habit with water glasses, and also stopping him begging at the sink). It’s understandable that cats would be attracted to a source of running water and I found that Misty also preferred the drinking fountain, and also Theo and Loki both preferred it (I did give them the choice of water bowls as well at first, but they always preferred the fountain). 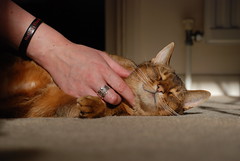 Simba, all about the scritches

Simba wasn’t as independent as Misty – he’d follow me about the house sometimes, almost dog like! Another trait he had, which was a little bit dog-like, was he sometimes liked to play fetch with toy mice. I’d throw it for him, he’d retrieve it, drop it near my feet and then miaow to announce he’d brought it for me to throw again (sometimes if I wasn’t playing with him he’d drop the toy mouse at my feet and miaow to indicate he wanted to play) – his favourite was if I threw it down the stairs as he liked he the way it bounced. He did like to knead me when he was in an affectionate mood, as well as bunting and purring very loudly. He’d tolerate being picked up to be fussed over by me as well without too much fuss. Unlike Misty he wasn’t terrified of visitors, for the most part – in fact he’d let some make a fuss over him and even enjoy it. 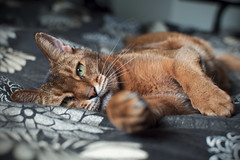 In the earlier years I struggled with insomnia and noise or movement could contribute to me having trouble getting to sleep and he had a tendency, if I let him in the bedroom at night, to be a fidget at first. He’d hop on the bed, knead me for a little bit, then settle down for 5 minutes, get up, turn around, maybe knead a bit more, settle down again, and repeat a few times more. It was tough, as he was sweet, but I took to shutting him and Misty out of the bedroom at night. However that presented its own problem as he’d scrabble at the door and wail from time to time, which was noisy and not good for the carpet by the door either, plus him and Misty would run up and down the hall and the creaky stairs occasionally! In the end I had to resort to using some sheets of cardboard as a vertical temporary barrier in the hall to use at night to keep them away from the door (I weighted it down, but he did get good at trying to find a way past). He did calm down a little bit at night in later years, thankfully.

Unfortunately in 2012 he was taken ill – he suddenly went off his food and became very subdued. Some medication from the vet brought him back to his usual self for 12 hours while blood tests were done, but he went downhill again, and the blood tests showed non-regenerative anaemia and suspected cancer. Cats are apparently very good at masking when they feel unwell, so he likely had been ill for some time. The prognosis was he likely had only days and he was very unwell and not at all himself, so I took the tough decision for him to be put to sleep rather than suffer further. It’s hard and so painful to say goodbye, but it was clear it was the right thing to do for him. Rest in peace, Simba.

Below are some more photos of the sweet boy… 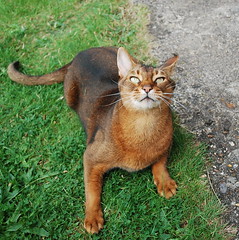 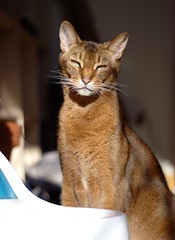 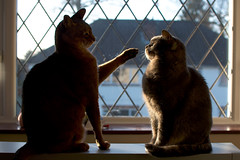 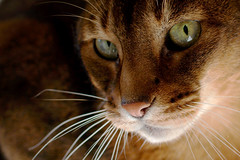 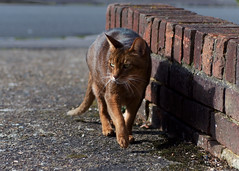 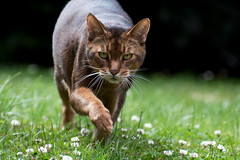 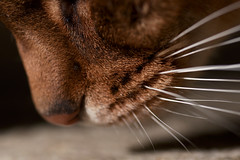 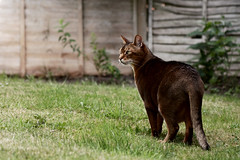