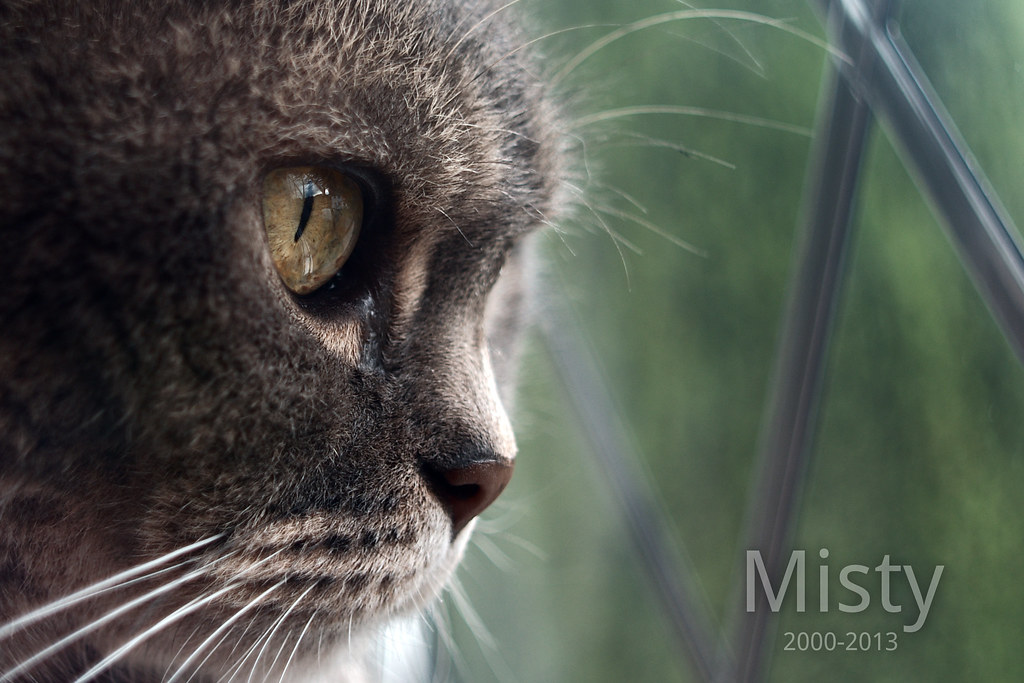 Misty (aka “Moomoo” or “Mistymoo) was a very sweet female cat who I shared a wonderful 13 years with, having got her as a kitten. According to the person I got her from she was probably a Somali/British Shorthair crossbreed, which kind of fits with her coat markings and build. 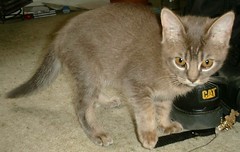 Misty, shortly after I got her

I got her as a kitten after following up on a local advert for an Abyssinian type cat. She’d already been sold once apparently but the couple who bought her returned her as they realised their long work hours wasn’t compatible with settling a kitten. Misty was rather timid initially, opting for hiding rather than exploration at first. I already had Simba, my first Abyssinian, at that point and he was about a year old, which was likely part of the reason for Misty hiding. Leaving her alone worked as a tactic and she started to tentatively emerge and explore. She’d hiss if Simba inquisitively came near, a behaviour she’d still indulge in from time to time later in life. 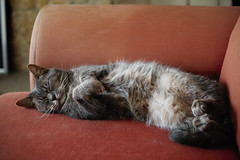 Most of her coat was the ticked agouti coat of a Somali or Abyssinian, with tabby markings on her face, but she also had spotted tummy and tabby markings on her on her legs and tail. Her fur was extremely fine and soft – she had an impressive undercoat which I would later brush out from time to time to try help her avoid hairballs (the amount of fur that would brush out was amazing)! As her fur was so fine it would stick to everything – she was a nightmare to have around dark clothing. Her coat would thicken over the colder months and thin a bit during summer. Her build was that of a small British Shorthair, particularly her face, so she was an interesting combination of physical characteristics. 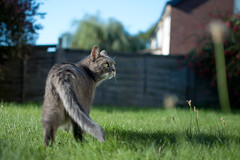 I kept Misty and Simba has mostly indoor cats, but did cautiously give them supervised access to outdoors (my maisonette has no cat flap and only a front door). Misty was never really that interested in the outdoors and even with the front door wide open she would generally stay in or just inside the door unless I was also outside, but if I did go outside she’d carefully explore the front garden and sometimes the path down the side of the building and across to the neighbour’s front garden. She hated the wind and if it picked up at all she’d flatten her ears because of the noise and scurry back inside straight away, and she’d also scurry away from people. She could be a bit feisty and hissy if other cats approached though. 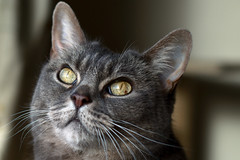 Because Simba was neutered and because she was pretty much an indoor cat, and a timid one at that, I didn’t get around to having her neutered until much later in her life – there was no risk of her getting pregnant. Not being neutered did mean she would cycle into heat from time to time and get very very tarty! She was vocal when in heat, but thankfully not too bad. She’d tart quite heavily at Simba, who was never entirely sure what to make of it, although once in a while instinct would kick in and he’d try have a go with her – I could tell if he’d had a go as he’d come and miaow insistently at me afterwards. Eventually I did have her neutered before she got to the age where such surgery would be quite risky. She was very lean prior to neutering, but her figure did fill out a bit after the operation. 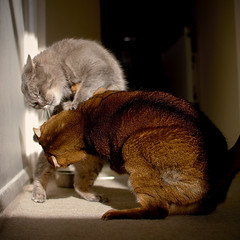 Misty, not taking any nonsense

Her relationship with Simba was mostly one of tolerance. They never really curled up together or even that near to one another. There was some occasional mutual grooming, although odds were it would turn into a little battle. As I mentioned earlier when she was in heat she would try and cajole him into having a go with her, which mostly just confused him. She seemed to have that slightly clichéd female cat tendency to randomly swat and hiss at him when he walked past, only doing it very occasionally – perhaps it was just to keep him on his toes.  They would fight occasionally – thankfully never long fights – I was never sure who started them but Simba didn’t much like her being pushy with him. She had needle-sharp claws though and Simba would sometimes end up with scratches and scabs on his face from the tussles! She was over a kilo lighter than Simba, especially when younger, but because of her sharp claws she was no push over and her dense coat seemed to serve as good armour against claws or teeth. When Simba passed away she did miss him though and would check around the flat for him, especially the first couple of weeks.

Misty, posing for my partner

As I don’t regularly have friends come to my home she didn’t get used to people other than me when she was younger and so remained wary of people throughout her life, which meant it was very rare for anyone who came to visit me to actually see her! Once in a while they might catch a brief flash of grey scurrying low to the ground and rapidly towards another room, or I’d direct people to carefully peer behind the speakers or tele to her hiding spot, but that was it. She would become tolerant of girlfriends (i.e. she’d stay visible and not hide), although she’d not be the most warm and friendly creature towards them for the most part, but once in a while she’d let herself to be fussed over by them. Only the most favoured by her would get one of her special gentle headbutts from her. 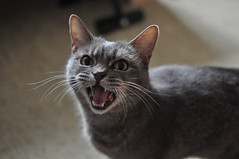 After her initial shyness when she first arrived in the home she became friendly with me. She would love to curl up in the gap between me and the arm of the sofa, and had a lovely strong purr when being stroked. If I made a cave under the duvet next to me in bed she’d curl up in that as well for a while (until Simba poked his nose in, in which case she’d be straight back out again). She would tolerate me picking her up and cradling her on her back for a bit (like a baby), which was very sweet. Her warmest sign of affection were little head-butts – if I leaned my forehead in towards hers she’d gently bump her head against mine with her eyes closed.  She could be fairly communicative and had a variety of different vocalisations she’d make to express different things (including her noise to remind me that it was feeding time). 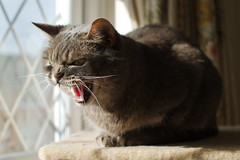 After Simba passed, as I mentioned above, she did miss him a little bit. Over the course of a few weeks she would seek more attention from me and became a little more outgoing than before, and she would curl up near me more often and come to be stroked more often, which was very sweet. I did feel a little bit guilty about my plan to add a pair of male kittens to the household as she’d adapted quickly to not having to share with another cat and I suspected she wouldn’t be impressed by kittens. I originally planned to do scent exchanging over a few days before introducing the kittens to Misty, keeping the kittens in the kitchen during that time. But Misty could hear the kittens in the kitchen and it just seemed to be stressing her to hear the noises but not see the source. From speaking to one of the breeders she didn’t seem to think it would be bad to do the introductions sooner rather than later, as the kittens were small and wouldn’t be aggressive, so later on the day of Loki’s arrival I made the introductions. As expected Misty wasn’t impressed by the kittens, and there was hissing on both sides, but no aggression just standing of ground. She didn’t like to be near them at first though and would slink off once she’d made her point. They grew very curious about her though and would want to sneak closer for a sniff. Gradually she did come to tolerate them being a bit nearer to her, just with warning growls if they pushed their luck a bit much. Based on how she was with Simba I don’t think she’d have become friendly with them, but it would have been interesting to see how tolerant she became. 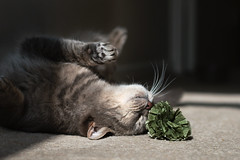 Unfortunately only half a year after Simba had passed away, and only 3-4 months after the kittens had joined the family, Misty became ill. She went off her food and started loitering next to the drinking fountain and drinking lots of water – the latter being a fairly clear sign of likely renal problems. The vet did blood tests and confirmed her kidneys were not in a good way and she was admitted and given fluid therapy to try improve her blood work. Due to her not being comfortable with people other than me she was very stressed being kept at the vets, but I visited her every day and after a few days she did respond to me again and would start to eat a little. The prognosis wasn’t good, but her blood had improved a bit so the vet suggested trying her at home to see if she would eat and if she had enough kidney function left to manage for a while longer. Her appetite remained weak though, she continued to lose weight and she was soon back to loitering next to the drinking fountain. It was a tough decision to make, and especially painful having lost Simba the previous year,  but it was clear that for her sake it was time to say goodbye to dear Misty rather than have her suffer. She was put to sleep with me stroking her. Rest in peace, Misty. 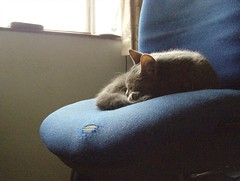 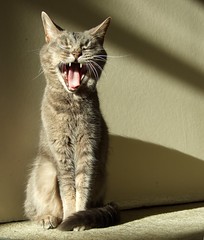 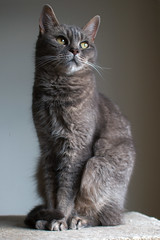 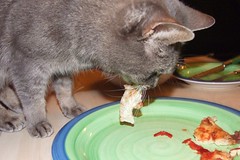 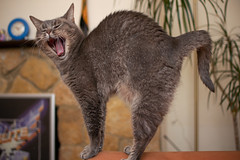 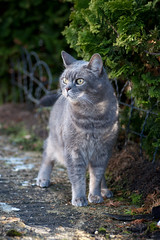 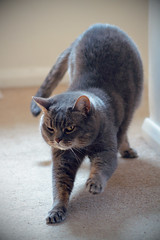 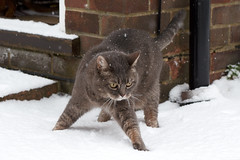 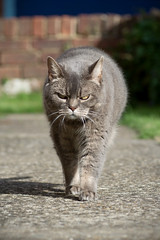 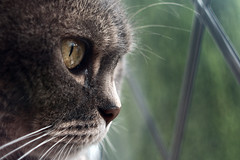